Women in IT, the struggle continues!

March 8 will be International Women’s Day. At Efficy we wanted to mark the occasion and use this blog post to show how far we have come… but also how far we still have to go. Promoting the place of women in the IT sector is no easy task. Except at Efficy ?

Being a Woman in a Man’s World

Being a woman in the IT sector is quite rare. Female students represent less than 10% of all enrolments in computer engineering courses, and the average recruitment rate of female IT graduates is around a meagre 20%. There are many initiatives to encourage women to join the tech industry (or rather return to it, because some statistics highlight that half of the women in IT have left). The first is to fight against gender stereotypes in children’s job aspirations. Parents and teachers have their role to play. So too do less obvious players: toy manufacturers! For example, every year, Mattel, who manufactures Barbie, invites people to vote for Barbie doll’s next career. In 2010, the public voted for Computer Engineer Barbie, and thus was born Nerdy Barbie. 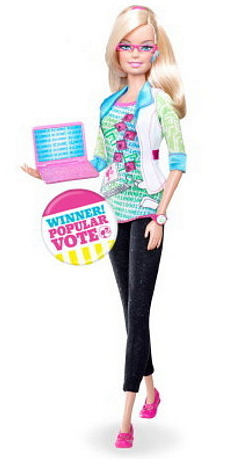 For a more, say, grown-up audience, Belgium offers the Women in tech in Brussels, in France, there is the Femmes@numérique movement. In the United States, the Women in IT Awards recognise women with the most outstanding profile and background in the industry. This movement is soon to spread to Berlin! So, how does Efficy compare?

Being a woman at Efficy

Today, at Efficy, there are 37 women with 147 male colleagues. Women hold support posts such as Human Resources, Finance, Marketing, Sales, etc. Fortunately, we also have female colleagues in more technical positions. We have female developers, managers, consultants and even an E-Deal CRM! product support manager. Another important point to mention is that the Chair of our Executive Board is a woman. So, as you can see, being a woman at Efficy is not so bad.

At Efficy, we have identified several areas for improvement to encourage the hiring and retention of women. These measures include: equal pay; flexibility at work, for example in working hours; and teleworking is strongly encouraged.

Women in IT (WIT2020) is Efficy’s programme for promoting diversity in IT careers and digital professions. With WIT2020, Efficy mobilises its entire network to launch initiatives among women students in engineering schools or universities so as to attract and hire more women in the digital sector. The company is committed to a continuous improvement approach, based on the principle of professional equality between women and men. This is achieved by promoting the diversity of career paths, organising awareness campaigns on digital professions for female engineering students and by paying close attention to non-discrimination in career paths.

So, ladies, what are you waiting for? Click here to join us!