Summary of the book Fanatical Prospecting

Fanatical Prospecting is one of the most read and recommended books in the sales world.

Its author, Jeb Blount is an international consultant and speaker, and has a brutal sales background.

The premise of his book is simple:

Many sales gurus promise success, expensive tickets and cars if you follow their method. But they lie to you.

There is no foolproof method for anyone to succeed with sales, but if there were one, one of its central parts would be prospecting.

And that is what its 304 pages focus on: Fanatical Prospecting: how to take your prospecting to the next level. 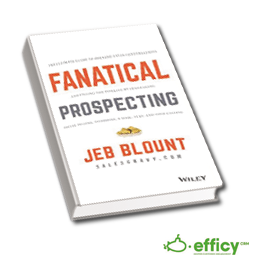 The starting point of Fanatical Prospecting

Sales gurus say that selling is easy (only if you follow their method, of course), and they say this because pretending something is easy is one of the best marketing hooks there is.

The reality is different and has more to do with what Seth Godin says in one of his best articles, there are no shortcuts:

If a supposed shortcut really worked it would become the market standard and no longer a shortcut.

Therefore, pursuing a shortcut or the latest sales automation (or any other discipline) is often a waste of time. Instead, focus on improving and consolidating the techniques that have been in use all your life in the industry.

And the most established technique in the world of sales is prospecting.

Why do you need to prospect?

The priority of any salesperson should be to keep their funnel full, which is why some of the best salespeople spend up to 80% of their day on this task.

There are three laws on which this statement is based:

The universal law of necessity

The more you need something, the less likely you are to get it.

It does not fail.

Necessity clouds your judgment and you make worse decisions. Plus, prospects often have a gift for sniffing out despair.

The best way to avoid seeing yourself in need of leads is the following rule.

This rule says that all deals you close in the next 90 days depend on the prospecting you do in the previous 30 days.

So, as tempting as it is to focus on closing deals and moving on from prospecting, he thinks he is bread for today and hunger for tomorrow.

The Law of Replacement.

Imagine that you have 40 prospects for this month and that, on average, you close a sale with 1 in 10.

Imagine also that you have a good start of the week and you close a deal with the first one you call. That leaves you 39 possible deals at the funnel, right?

Nothing of the sort. For sure that leaves you only 30 possible deals in the funnel, because your statistics say that the next 9 contacts are going to come to nothing.

So to replace that lead you will need 10 new leads, not 1.

If you have already convinced yourself that you need to prospect, how should you do it?

In his book, Jeb says that he usually starts his lectures with a joke.

“How do you make a commercial stop working? – Easy, you put a phone in front of him.”

The joke hides a truth like a temple: nobody likes telephone prospecting.

Prospecting is no fun at all: it basically consists of getting in touch with people who do not expect you to get in touch with them.

Therefore, it often causes annoyance and rejection at the other end of the phone.

However, telephone prospecting works, and it also works much better than its alternatives:

The response rate per phone contact is much better than email and is light years away from the rate on social networks. 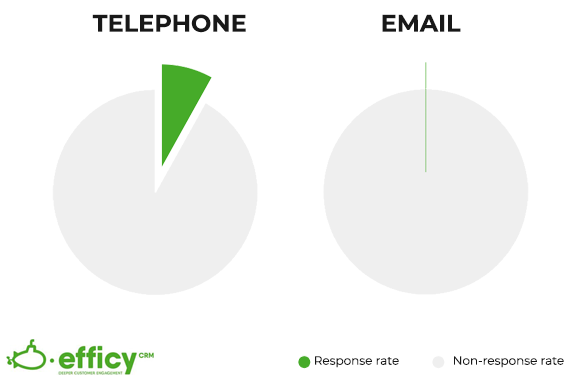 There are three reasons for this:

In fact, even companies with solid inbound marketing strategies to gain customers should practice telephone prospecting.

The most lucrative clients are simply not interested in calling you.

Put yourself in their shoes: their accounts are very valuable and at their doorstep there is often a legion of salespeople waiting their turn to sell them their solution.

If you wait for him to throw them all away, find you and get in touch with you, you’re going to wait a long time sitting down.

According to Fanatical Prospecting, if telephone prospecting is so superior, why do so few do it?

The short answer is that online prospecting is much easier and more enjoyable. It gets worse results, but is much more bearable.

The long answer is that telephone prospecting has 3 major brakes:

The reality is that sales are very tough, and the average salesperson receives more rejection in a normal working day than the average person does in a whole year.

And this is hard to take. In the end, we are social beings and are programmed to seek approval from others one way or another.

Therefore, in order to be able to do telephone prospecting you need to have thick skin. Not everyone is good enough.

We usually put off the tasks we don’t like to do until later.

Leaving an unpleasant task until tomorrow in a timely manner does not seem too problematic, but behind that premise, a lie is hidden.

It is never that punctual, and in the end the problem accumulates.

There is a children’s riddle that exemplifies this very well:

It’s the same with this kind of unpleasant task: if you don’t do your part every day you’ll find that the last week of the month you have to eat an entire elephant.

In Fanatical Prospecting this problem is exemplified by a real case that the author encountered in a consultancy.

Jeremy and Sandra worked for the company that had hired him.

While Jeremy was very detail-oriented, Sandra was a whirlwind.

The day Blount met them they behaved completely differently:

It’s true that on a couple of occasions Sandra would have been grateful during the call to have spent more time and love on her clients’ notes before picking up the phone, but more true is that her results overwhelmed Jeremy’s:

In 14 of the calls he managed to contact the company’s purchasing decision maker and in 2 of them he arranged a meeting.

When it comes to achieving results, done is often better than perfect.

What is the key to prospecting and sales?

In the end, everything revolves around one point: numbers.

For an elite athlete a small change in the numbers means everything: 1 centimeter or a few seconds is the only thing that separates the winner from the runner-up.

It’s the same with the best salespersons and that’s why they carefully analyse their numbers of contacts, appointments, responses and closing rates.

And there is only one way to do this, with the help of technology.

Therefore, if you want to apply all the lessons of Fanatical Prospecting you have to have a CRM. And the best one is Efficy.

Why don’t you try it?

Find out if Efficy is the best option for your business

Find out which are the best sales books

Here’s an eye-opening cyber attack stat… 39% of businesses in the UK suffered at least one cyber attack in 2021. The percentage looks set to[...]
Read more
Apple jointly holds the top 5 individual shares of the mobile device and PC markets in Europe and North America. So, when they make changes[...]
Read more
Human resources management has come a long way. From a not-too-distant past when companies only had “personnel offices” whose only job description was to keep[...]
Read more
Read more