To Call, Or Not to Cold Call?

Contrary to public opinion, research finds cold calling to be one of the most effective marketing techniques. Here, we share time-tested tips to connect with new prospects and convert them into happy customers. Also learn why, though unpopular, cold calling remains a salesman’s delight!

One of the oldest tricks in the sales book. Cold calling. Might give you chills just thinking about it. Cold-calling can be thought of as selling to people who aren’t raising their hands or haven’t shown any interest in your product or service. Salespeople have seen business behaviour tilt over the years, in line with technology shifts; but cold calling is the one method that has however remained relatively popular.

From minimum-wage retail focused salespeople to high-flying stockbrokers on wall street, and even political campaign staffers — cold calling has constantly been proven to be an effective, low-cost, high-impact technique for gaining new clients and generating sales conversions.

To be clear, cold-calling is definitely not a dark art that magically convinces prospects to believe  in your offering. To be fair, blindly picking up your phone to call random strangers and  pitch your product to them is not the most strategic move.

By applying cold calling strategies, businesses in any sector can rev up sales conversion rates, revenue and ultimately profits! Here, we zero in on cold calling and outline guidelines that are sure to put you in the driver’s seat of your cold call process and increase your conversion rates.

How do you cold call successfully?

Cold calling catches a lot of flak, primarily because of its low success rate, and breach of privacy. You can understand that most people hate it, well, except the sales professionals who smash their sales KPIs and neatly rake in millions in revenue using this tactic.

Obviously, not all convert, but these numbers show why cold calling remains valid as a sales technique. In the final analysis, regardless of technology advancement, people still want to be talked to and pitched to by their fellow humans rather than AI-run robocalls and personalised ads.

With the right application, cold calling holds unlimited growth potential for any business. Below, we outline a cold-calling script that plays off the same one used by Jordan Belfort and Stratton Oakmont to rake in up to $13 Billion.

1.   Start with names… and your purpose for calling.

To get what you want out of a sales call, it is important that you maintain control of the conversation. This starts from the very moment they blurt out the first “hello.”

One of the oldest psychological tricks in the books is to use people’s names when speaking to them; it instantly leads them on, so they are more likely to listen to you. Then, you follow up by introducing yourself and stating the name of your business.

Traditionally, when speaking to strangers on the phone, people are likely to ask such questions as “what is your name?,” “where are you calling from.” But the thing is that whoever asks the questions is in control of the conversation.

And if you do get put in this position, you might get thrown off your stride. But, by stating your name, your company, and the reason for the call, you can command respect and remain in control of the conversation.

Close-ended questions are otherwise known as yes/no questions. Open-ended questions lead to a lot of conversation and introspection on the part of the receiver, which as you may know is bad for a sales call.

Close-ended questions allow you to move fast in conversation, shaping the potential buyer’s perception of your business as you go, goading them towards a positive purchase decision.

Spot the difference? That is how close-ended questions can help you to get desired responses!

According to Gong, Successful cold calls are almost double the length of unsuccesful ones. (ratio 5:50 vs. 3:14) This means, to close, it’s expected that you’ll be doing a fair amount of talking. Being intentional about your word choice gives a better chance.

The same report hinted that asking questions like “How are you?” increases your chances, as it gives the impression of that you’re a trustable friend looking to help the see if you’re a good fit for them.

Your tone of voice also plays a key role. Another study by Close uncovered that your tone of voice determines your chances of success by up to a whopping 93%. When you pick your words carefully to include positive words like ‘happy’, or ‘fair’, you can begin to influence the receiver’s perception of what doing business with you would be like; thus, making it all the more likely that they’ll say yes.

4.   Be prepared for objections

Objections are an inevitable aspect of cold calling. Many folks have a pre-set bias against sales calls, which is understandable because no one wants to just ‘give away’ their money.

However, with the right tactics, any skilled salesperson can get ahead of this bias. They’ll come at you with all sorts: “there’s no room on our budget”, “we have committed to another vendor” etcetera.

What professional cold callers do is, create a 3-point rebuttal script:

All too often, salespeople go on the defensive at the slightest whiff of objection from the subject. Then they begin to lose their credibility, trying to say as much as possible to get the subject to agree.

The problem with this approach, the receivers can smell your desperation, and that would only make them even more unwilling to buy. So, instead of all that, calmly say reassuring sentences like “I understand you”. This way, they will feel heard, and become more likely to indeed make that purchase.

Instead of losing control and going kamikaze, you must stay calm. Calmness has a disarming effect and will help you to stay in your game. So, rather than take rejections to heart, you can simply glide over them with humour and then continue the conversation.

After you have successfully parried their objection and carried on with the conversation, you can now again insert a proposal in the conversation; only that this time it will be worded to address whatever objection that they had raised.

So, for example, if they say that they already committed to someone else, you could tell them (based on factual information) that your firm offers better quality at a lower cost. 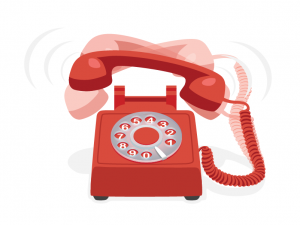 5 basic guidelines to have a successful cold calling

In fact, quite recently, nuisance calls became a widespread concern that led some federal agencies to create national ‘Do Not Call’ registries where people can enrol to bar them.

But it still can work. Why? Business phone numbers cannot be placed on the registry, so they are still open to cold calls, which is good news for B2B. Also, using these tips and tricks, you will be well equipped to make more sucessful cold-calls – and that includes not being overly obnoxious.

Work from a script

What’s bad about sticking to a script? It’s not uncommon now to find salespeople refusing to stick to the script because they think that they know better.

What they fail to realise is that these cold-calling scripts are the results of intensive research based on what works and what doesn’t, as well as information that leverages sales psychology.

To avoid sounding robotic and to aid your flexibility, we strongly advise that you memorise your value proposition. When you don’t need a script to explain who you are and what value you create for them, you’re better prepared to go without a script.

Call immediately when you get a lead

A Harvard Business Review hinted that chances of touching base with a lead during the first 5 minutes after collection is 100% higher than if it had been much later.

There’s not yet any  reason for why this happens. All we know is the data. The longer you wait to act, the less likely it is that you actually establish contact with the lead, not to mention, converting it into a sale.

Let’s face it: getting your calls repeatedly ignored is not an enviable position to be in. That said, don’t throw in the towel after only your first, second, or third attempt.

The outcome of Callhippo’s research states that by increasing the number of call attempts, sales reps boosted their conversion rate by up to 70%. While positive results might need a bit of persistence, you need to strike a balance to make sure that you’re not too persistent.

Get the timing right

When asked what it is that they hated the most about cold sales calls, surveys revealed that people generally thought that cold callers had bad timing.

Nobody wants to talk to you about a new B2B SaaS framework at the breakfast or dinner table with their beloved spouse. They don’t want their bedtime rudely interrupted either.

Another 2020 study showed that the best time to cold call is between 3:30 and 5:30 PM, as this is the time most people are happily winding down on the day’s work.

Keeping them relaxed in this manner means they’re likely to open up to you. A prospect opening up to you means you‘re more likely to make the sale.

A major reason why many receivers brand cold calls to be nuisance calls is because, more often than not, marketers find themselves simply fishing in the dark. They know nothing about the receiver and are just looking for the opening to insert their marketing call-to-action, and then call it a day!

In the hit TV Show – The Office, the protagonist Michael Scott, a masterful salesman was shown to own a Rolodex with contact cards that he had gathered over his decade long career in sales. The most notable thing about this Rolodex is that he had scribbled on the back of the cards, little information points about whoever was on each card. This way, he always knew exactly what to talk about and what not to mention.

However, it’s 2022, and who needs a Rolodex anymore? Not us, and definitely not you.

With Efficy’s interest management tool, you can create a system to segment your database based on each customer’s interest, making it easier to find common grounds and get results with cold calling just like the experts did.

Here’s your chance to schedule a demo showing you how the CRM system of Efficy is just the right choice for your business!

Try Efficy and level up your business!

Sales course for large companies
The Sales Pitch: what is it and how to do it yourself

If you run a start-up, you probably know that the difference between survival and failure lies somewhere in the balance sheets — in other words,[...]
Read more
When it comes to sales, finding leads is only half the battle. The next step is nurturing them towards a sale. Follow-up emails are an[...]
Read more
Intro Much like there are no omelettes without breaking eggs, there are no customers without leads having progressed through your sales funnel. The lifeblood of[...]
Read more
Read more