What is e CRM and what advantages does it have over a CRM?

To find the origin of e CRMs we have to go back to the 1980s, when some companies were starting to evolve from traditional databases to the first contact managers.

It goes without saying that these early versions were very expensive and offered hardly any functionality.

Over the years the tools were modernised and around the year 2000 the first commercial CRMs began to become popular as much more affordable and useful tools.

However, it didn’t stop there; as technology evolved, these software packages did so at the same time, until the first e CRMs began to appear

What are e CRMs?

In essence, it is all those CRMs that are based on the cloud and whose support, management and processes are carried out online.

That is why e CRM and traditional CRM have a series of important differences which, in essence, make e CRM a superior option.

So much so that, at present, almost all CRMs fall into the e CRM category, although the generic term is still used to refer to them.

In fact, according to study data, 82% of food, drug and mass product retailers use an e CRM. 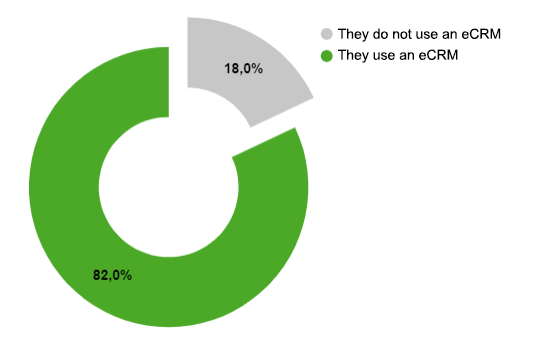 Differences and advantages between an e CRM and a traditional CRM

There are 4 major differences between these two types of CRM:

The first big difference is the entry costs to install and start using the CRM.

In traditional CRMs, you needed to purchase the software and servers on which it was to be installed. This payment, although unique, used to represent a very important outlay that only some companies could access.

On the other hand, e CRMs, as they are cloud-based, all the software and hardware remain on the side of the company providing the service, so the CRM customer can forget about that area.

This greatly reduces the cost of the tools and makes them much more accessible.

Use of the tool

In traditional CRMs, access was generally only available from the computer network connected to the servers on which the CRM was running, so user access was limited to the office.

To connect to an e CRM, you only need an internet-connected device and your user data.

This is an incredible advantage for all users of the tool, especially for those who need to connect from different places or travel often.

Another point for e CRMs.

Customization of the tool

In traditional CRMs, if at any time you needed to customize a particular aspect of the tool for yourself, you needed to hire specialized consultants who could modify the tool or directly, it was impossible.

With today’s more advanced CRMs such as Efficy, we first listen to the customer and then adapt the tool to their needs so that they can get the most out of it.

Updating and maintenance of the tool

In traditional CRMs, to enjoy updates and changes in the tool you had to wait for the next model to come out and buy it again.

This is not the case with e CRMs, where changes, as they are adjusted and implemented, are carried out on all users’ accounts.

Do you want to start using an e CRM like Efficy?

Luckily, e CRMs have become a market standard and most of the commercial tools of this type on sale are.

However, not all of them are as powerful and adaptable as Efficy.

The best proof that our system works is that we have over 4,500 clients in more than 33 countries.

You can start selling more and better today by using an e CRM like ours.

What are the best customer care tools and why?

We can’t speak for you, but every business at some point has hit that rock bottom—that marketing low that is all too often signposted by[...]
Read more
To talk about Salesforce is to focus on one of the solutions with the longest track record and brand presence in the world of CRM.[...]
Read more
Choosing a CRM is not an easy task, especially with so many solutions on the market. To help you along the way, we have prepared[...]
Read more
Read more