The history of CRM: from card holders to business intelligence

To talk about the history of the CRM , we do not have to go back to some primitive software as we might think.

We have to go back much further, to the card holders used by salespeople so as not to lose contact with their customers.

The most famous was rolodex. 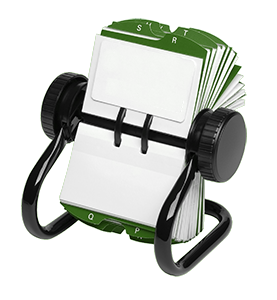 These devices became the most valuable asset of each salesperson, because they held all their contacts.

Needless to say, this solution was tremendously ineffective.

Sooner rather than later, technology would come to the rescue and the digital history of CRM as we know it would begin.

The beginnings of the CRM

In 1986, the seed of today’s CRMs was created in Dallas (United States); Pat Sullivan and Mike Muhney developed a tool they called ACT, which stands for Automate Contact Tracking.

In essence, it is a simple contact manager that will replace the precious role of the sales representatives of small and medium-sized companies.

In 1989 the next exponential leap was made by Goldmine, which developed software called SFA (Sales Force Automation).

With a more pretentious name and better technological development, Jon Ferrera, the creator of the tool, began to approach a CRM in the true sense of the word.

During this decade there were 3 main events that marked the development of CRM tools:

The end of the war of acronyms

At this time, the first software aimed at customer management and acquisition had already been called ACT and SFA, but also CMS, ECM or CIS.

In the end, the term that became popular was CRM, Customer Relationship Management, probably because it was the broadest and most inclusive.

In 1993, after trying to convince his boss to market his internal customer management software, Tom Siebel, Oracle’s 50th employee, founded the Siebel company.

This company and its software would become the market leader with up to 45% of the share.

Its development was so exponential that 6 years later Fortune magazine named it the fastest growing company in the country.

In the same year that Siebel was a Fortune Award winner, Marc Benioff founded Salesforce, also after leaving Oracle.

This tool was born with 2 atypical premises among the CRMs of its time:

Its competitors did not make the same bets, and this allowed Salesforce to gain an overwhelming market share in the following years.

Throughout this decade most of the players in the world of ERP or IT in general such as Microsoft enter the market.

Taking advantage of the “.com” bubble, which destroys the market and pushes many CRM tools such as Siebel to the limit, companies such as Sage emerge after many companies have merged or Microsoft takes over 40% of the market by buying CRM and ERP solutions and integrating them.

CRM in the last 10 years

In order to end the history of the MCA, we have to get to the present day.

This is how trends such as CRM such as SaaS, eCRM and social CRM and mobile CRM emerge.

Companies are beginning to understand the need to put the customer at the centre of their business beyond the use of software to manage their relationship with them.

Nowadays, most CRMs (or at least the most useful ones) are specialised, SaaS, in the cloud and able to adapt to each type of business

Do you want to try a CRM with a lot of history and those features?

Efficy is a CRM that meets these requirements, and many others.

The best proof that the system works is that we have more than 4,500 clients in more than 33 countries.

You can start managing your business with the best possible tools today.

What are the different types of CRM? The 7 benefits of CRM use in your company

We can’t speak for you, but every business at some point has hit that rock bottom—that marketing low that is all too often signposted by[...]
Read more
To talk about Salesforce is to focus on one of the solutions with the longest track record and brand presence in the world of CRM.[...]
Read more
Choosing a CRM software is not an easy task, especially with so many solutions on the market. To help you along the way, we have[...]
Read more
Read more